Source: No pay, no play: The campaign to give musicians a minimum wage (smh.com.au)

But it was never that funny in the first place – and especially not if you happen to be one of the thousands of freelance musicians trying to make a living from gig to gig.

Just ask drummer Logan McCrory, who has been gigging for 30 years. During that time he has heard it all when it comes to negotiating a fee.

But now there is hope on the horizon for Mr McCrory and other musicians already battered by two COVID-19 lockdowns.

Under a motion introduced yesterday into State Parliament by John Graham, Deputy Leader of the Opposition in the Upper House, venues using public funding will be required to pay musicians a minimum fee of $250. This would cover upcoming concert series including Great Southern Nights, funded by Destination NSW.

“As we open up out of COVID it’s vital to make sure there is support for musicians and artists more generally,” Mr Graham said. “When there is public money at stake there is a public expectation that musicians are actually getting paid. We know that is not always the case. This is an attempt to bring that to a head in NSW.”

The move, which is likely to be debated this week, is being supported by Musicians Australia, the arm of the Media Entertainment and Arts Alliance that represents freelance musicians.

“If you pour beers at a pub or wait tables you’ll get a minimum wage by law but if you’re standing in the corner of the pub, holding a guitar and singing, you can be playing for peanuts,” said MEAA Musicians’ director Paul Davies. 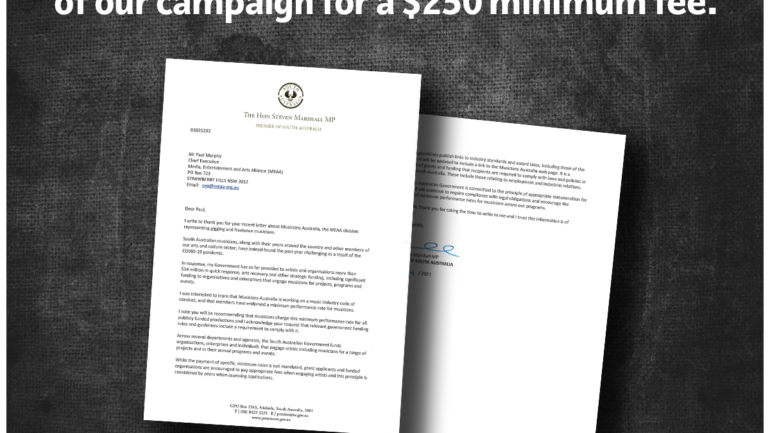